KAKHAN: That Joke Pairing That Became A Beloved OTP

An illustrated blatheration about how on earth this came to be.

So! The summer of 2015. I needed something new to watch. Everyone had been going on about Jojo's Bizarre Adventure not long ago, whose title I remembered from my anime VHS window-shopping mini-weeb days in the 90s. Thought I may as well give it a try, even though I doubted that some story about buff blokes beating each other up would be particularly interesting to me.

Oh boy I was wrong. Starting off with the first OVA (which starts in the middle of Stardust Crusaders LOL), by the end of Episode 3 I was hooked. This show was BADASS. And I loved how much these big buff dudes actually cared about each other. Fuckin GREAT 👍

I had soon watched all of the available anime and read all of the available manga. Having started with SDC, I felt a particular attachment to its cast, and felt deeply sad that Kakyoin, Avdol, and Iggy had perished near the end of the adventure. So I rectified this with an AU. Things would be Slightly Different enough that they would all survive the final battle and get to live out full lives. Hallelujah hooray!

While I had Avdol go off and live his life with Polnareff in France (of course), I started imagining what might happen if Kakyoin (now going by Kakyoin Tenmei) went to Morioh with Jotaro. What interesting shenanigans might occur? What kind of interactions might he have with the Diamond Is Unbreakable cast? 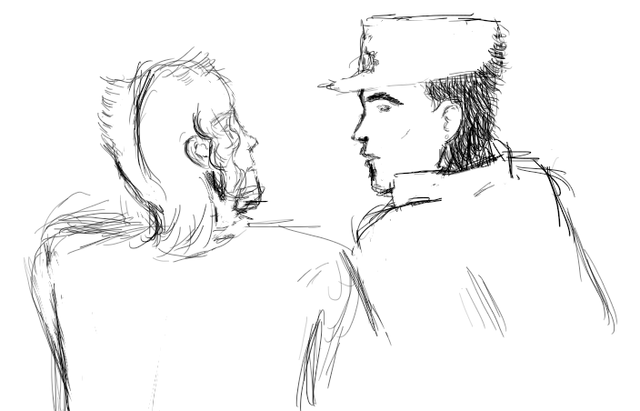 One day (which actually happened to be my birthday, huh) I was just doing muh drawing as per usual when my hand brought forth this surprise. 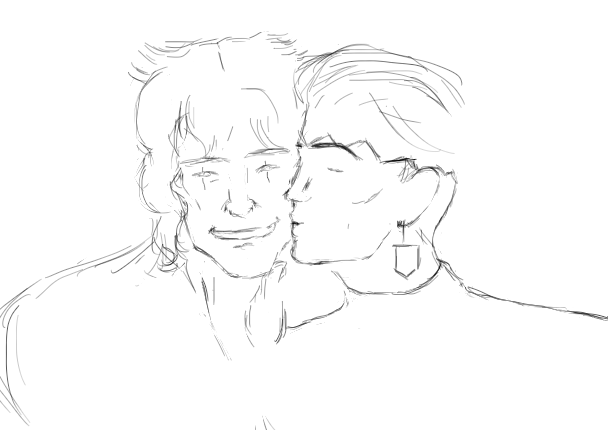 Wait... WHAT?! Hang on hang on hang on. These two were supposed to be fuckbuddies and nothing more. Yet there is clear mutual affection going on here?! WHAT?!?!?! Kakyoin wasn't supposed to be interested in pursuing a romantic relationship with Rohan!!

I felt sceptical of this. "Does this really work?" I wondered. "I'm not even sure they're compatible in that way. It surely won't last."

Initially, I ran with this idea that Kakyoin and Rohan weren't truly compatible and that an attempt at a relationship would end in mutual angst and disaster, because oh how I love torturing my faves. And it would be drama from the very beginning, with Rohan reacting to his own discomfort over his unwanted crush on Kakyoin by cranking up the tsuntsun, because he's an immature arsehole like that. 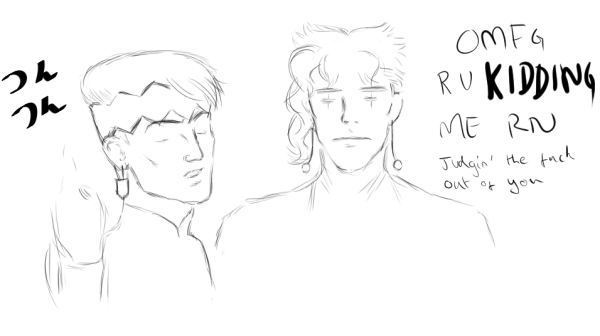 Then, after a while of further dickishness from Rohan, Koichi taking Rohan aside and calling him the fuck out, Rohan apologising to Kakyoin, and a slightly awkward but nice friendship seemingly beginning to bloom, The Drunken Night would happen.

Kakyoin, depressed, horribly lonely, and desperately craving company and affection one evening, turns to his long-time 'friend' alcohol to try to numb his misery. (We'll go into more on the source of Kakyoin's misery later.) He can't exactly talk to Jotaro about his problems, because... nah, man. But then Kakyoin happens to catch Rohan about to head home after probably discussing something with Jotaro, and he invites Rohan into his hotel room for a beer. Rohan accepts. 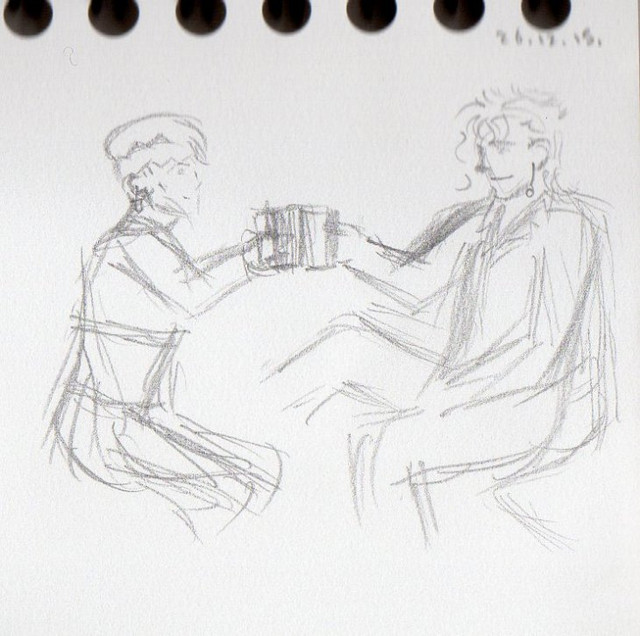 With inhibitions lowered thanks to the alcohol, Rohan starts flirting with Kakyoin. Kakyoin likes it. Rohan then kisses Kakyoin. Kakyoin likes that too. And of course, things escalate, all the way. When Kakyoin wakes up the next morning to find Rohan in his arms, he is initially shocked, although... last night was rather good.

At this point, things could go multiple ways. After Rohan wakes up, Kakyoin might then reject him, saying last night shouldn't have happened (some Rohangst) - OR Kakyoin accepts when Rohan invites him to come and visit him later, and an ultimately disastrous attempt at a relationship could begin (much higher potential for Rohangst). OoooOooOoOoOoh

In Trainwreck!Kakhan, what tears them apart in the end is both mutually poor communication and Rohan being an immature arsehole who is unwilling to self-reflect or own up to his mistakes. In their final argument, Kakyoin loses the last of what little patience he had left for Rohan and breaks things off for good, telling Rohan that he never wants to have anything to do with him again unless it relates to finding the killer. Rohan is heartbroken.

But Then Came Years of Fluff

However! Due to the fact that I am a massive fucking sap, I also thought it'd be nice if these two really could find a way to make things work. It would take a LOT, but... it was possible! After all, they have a fair bit in common - both artsy loner weirdos, both like travelling, both into nerdy things, Rohan is ever-curious and Kakyoin knows a shit-ton of interesting random things, etc. Rohan would need to learn to be mindful of his self-defence mechanisms and to be more considerate, Kakyoin would need to stay patient with him, and they would both need to learn to actually communicate properly with each other. If they managed to overcome the things that cause conflict between them, something good COULD come of this, their relationship COULD last, AND they could become Best Comedy Duo Ever too! 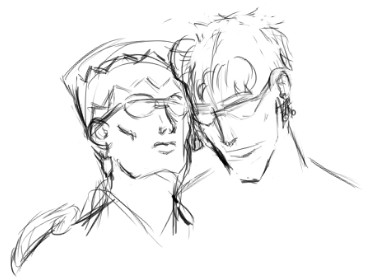 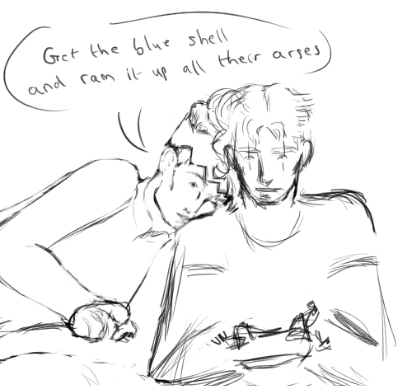 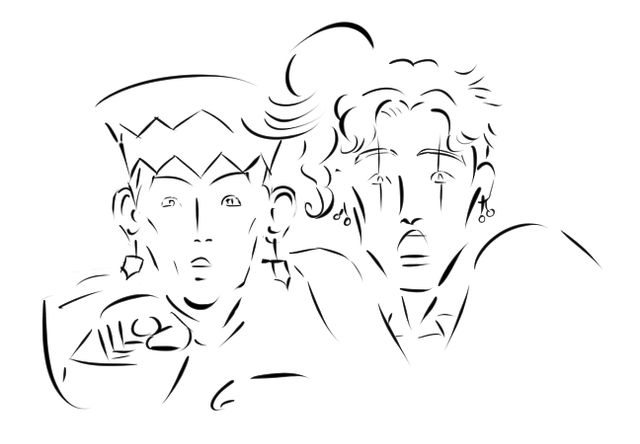 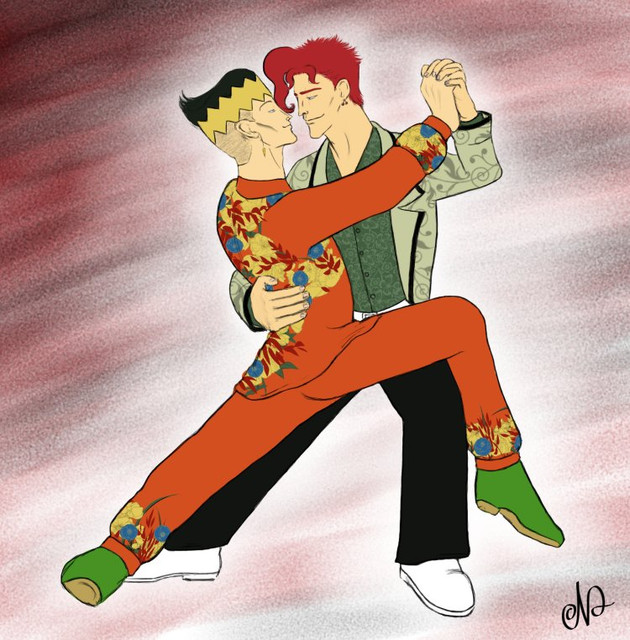 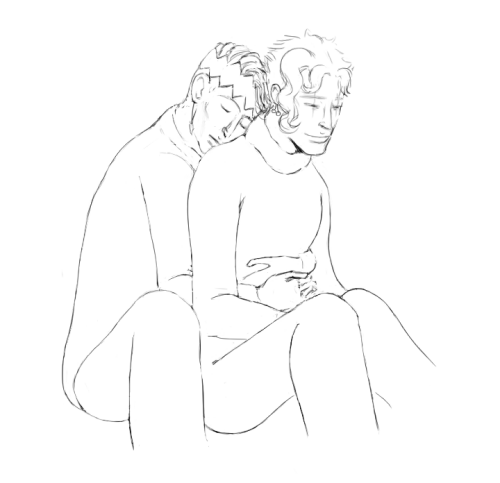 With Kakhan fluff now being my main focus, I began to explore how the two would support each other through various difficulties. One major thing is that I imagine post-SDC!Kakyoin to be suffering with severe clinical depression and PTSD, which, in my storyline, go undiagnosed and untreated for well over a decade due to a near-lethal combination of shame and lack of knowledge on the subject. (The onset wouldn't have been in more recent times but in the late 80s, after all.) If Rohan wants to be of any help to Kakyoin regarding this once he has opened up to him, he needs to grow the fuck up and step the fuck up. And I imagine that he does - that he loyally stands by him through thick and thin, and, with the help of Avdol (who, it turns out, also has PTSD but was diagnosed much earlier), Polnareff, and Kakyoin's ex-wife Yurika, eventually succeeds at persuading Kakyoin to seek therapy.

Although Kakyoin is of course not magically cured because that's not how it works, his condition is gradually improved thanks to finally receiving treatment. Kakyoin is forever grateful to Rohan for sticking by him while he was at his lowest. 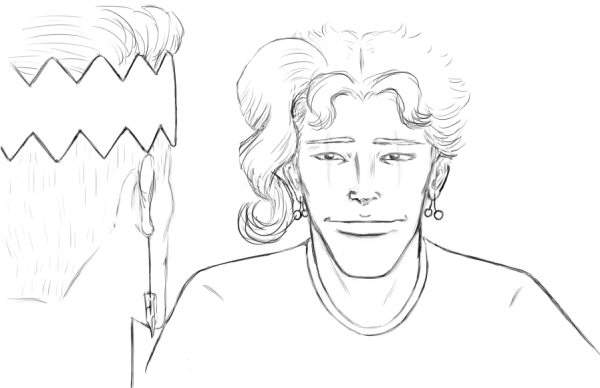 I also imagine that Rohan has his own mental health difficulties, although not nearly as severe as Kakyoin. I imagine he has difficulties with paranoia and a fear of abandonment in particular, which lead to some self-defence mechanisms that have the potential to push Kakyoin away if left unchecked. However, once the two have a healthy level of communication going - and if Rohan doesn't just brush things off every time he does something wrong - Kakyoin realises that some of the things Rohan does do seem to stem from insecurity and they figure out ways to help Rohan deal with it without causing conflict between the two of them.

They went from a trainwreck jokeship to this level of mutually supportive and honestly that fills me with ridiculous amounts of FEELS :'|

So that's about it for how Kakhan evolved over time for me, haha. Wow, that was a long blatheration. xD I don't know if I've done this summary of their story as I imagine it justice, as I have the attention span of an excitable 5-year-old on 2 litres of Dr. Pepper, and I will probably be adding and changing bits and pieces here and there every so often, but I hope this at least gives a glimpse into how and why I fell so in love with this ship. 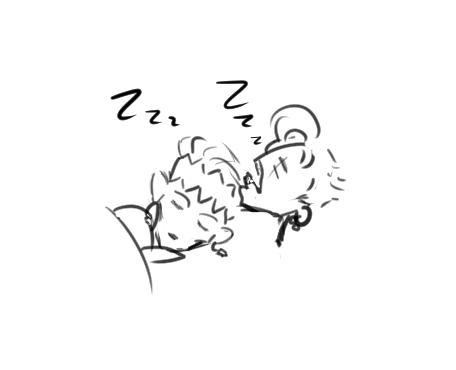