One day, Rohan gets the opportunity to see into various alternate timelines. He is shown timelines both pleasant and unpleasant, including ones where Kakyoin never even came to Morioh - either because he was not asked to or because he'd died at 17. But none are as distressing as the final one he sees, which shows the day of Kakyoin's breakdown, but... different. In that timeline, Rohan never found Kakyoin sobbing in the living room that day, because Rohan had already left the house as he'd originally planned to do. Instead, Kakyoin was left alone with his despair, to tragic consequences. Rohan watches on helplessly - and utterly horrified - as this alternate Kakyoin proceeds to use his own stand to break his neck and end his life. The sickening crack startles Rohan, and he clamps his hands over his mouth. He then sees himself returning home and finding the body. He sees himself cradle the corpse, hears himself screaming - then the vision ends.

For a time, Rohan is rooted to the spot, his hands still clamped over his mouth. He sits staring at the spot where the vision had played out before, wide-eyed, shaking, and feeling sick. This was the very thing he had feared would happen, ever since that day. So many sleepless nights he had spent gripped with fear that Kakyoin would snap and kill himself, even after Kakyoin had started therapy and began showing signs of improvement, and now he had seen that very thing happen right before his eyes...

Panic overcomes Rohan and he bolts up. He runs, runs with all he's got. He has to get to Kakyoin, now.

When he sees him, he practically screams his name, startling him as he grabs his shoulders. Kakyoin asks Rohan what's wrong, noting how badly he is shaking. It takes Rohan a while to be able to speak properly, as he is so out of breath, but he slowly tells him everything.

It's when Rohan finally manages to spit out the conclusion of what happened that the tears come. He puts his head on the shocked Kakyoin's shoulder and pours his heart out to him, confessing that he has been physically worried sick for some time now over the very real possibility of losing him to suicide. He finishes by begging him, begging him, not to kill himself... 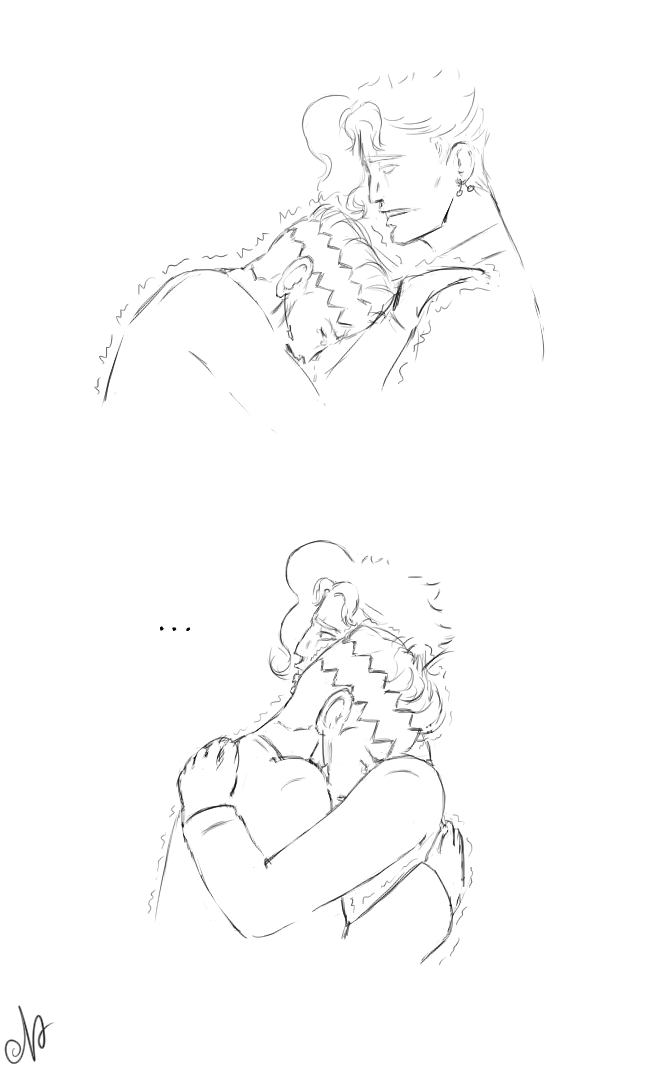 ... Oh god. Kakyoin had known that something hadn't been quite right with Rohan lately, as he'd often seemed tired and sad, which wasn't like him. But when he'd asked him about it, Rohan would shrug it off, leaving him none the wiser. Kakyoin had suspected it was because of him, but having it essentially confirmed feels... awful.


Back to JJBA Scribbles